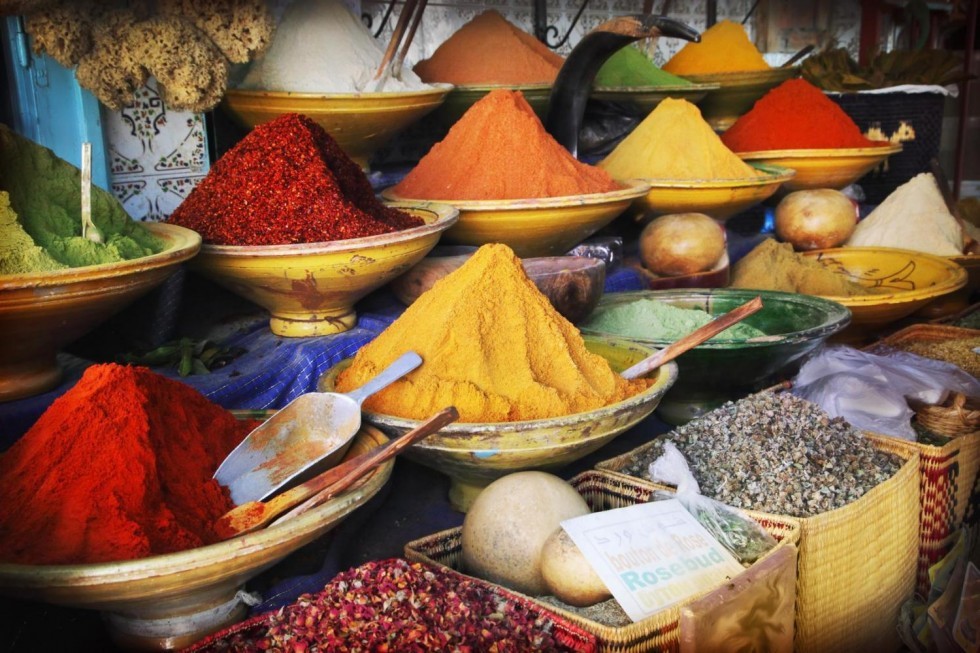 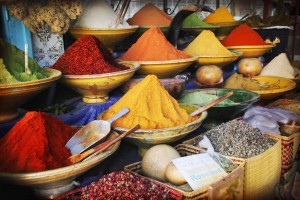 The great sea voyages of the Portuguese explorers Ferdinand Megellan, who served for a while in Morocco, Vasco de Gama and the Spanish captain Christopher Columbus expanded trade routes around the world and especially the spice trade and the security of these routes was crucial. Morocco was on the route between Europe, the Middle East and Asia and so acquired a number of spices as Portuguese and Spanish enclaves and ports were established along the Moroccan coast. Spices are a key element in Moroccan cuisine and you can see freshly ground spices in colored mounds in the souks with their distinctive smells. Spices should be used whilst they are fresh. Many spices and ingredients once imported are now home grown, like saffron from Tiliouine. Saffron is the most expensive spice in the world and is widely used in Moroccan cuisine for coloring and flavor. The production of one single kilogram of saffron requires 150,000 flowers. The separating of the stamen from the purple flower is done by women. One gram of saffron can cost on average US$6.28 depending on quality and quantity. The world market today for spices is said to be valued at US $ 4 billion. Other spices used include cinnamon, cumin, coriander, paprika, turmeric, saffron, white pepper, red chili, cloves and sesame. All are available in the souks and Morocco is now a source of spice exports. The main spice export is Ras el Hanout which translates as the head of the store or the pick of all the best spices-it can extend to many different spices mixed together and differs from store to store. It can be sprinkled on chicken or fish before baking, frying or grilling. The blend of spices delivers flavor and a subtle fragrant aroma which is one of the many secrets of Moroccan cuisine. Moroccan housewives will likely have their own spice recipes for lamb tangine or couscous. The art is to develop your own spice recipes although at first you are like to follow other people’s. Spices are essential for tangines, couscous ,lamb dishes and for sweets try the spice mixture bssibissa kakalu. Spices can be derived from a dried seed, fruit, root, bark, or vegetative substance primarily used for flavoring, coloring or preserving food. Sometimes a spice is used to hide other flavors. They can have medicinal properties, garlic for instance can be an antibiotic. In the Middle Ages they were especially prized because as no refrigeration existed dried and salted meet became extremely dull fare . Spices brought life and taste to otherwise uninteresting dishes. Moroccan cuisine has become increasingly popular with Moroccan restaurants springing up all over America and Europe and throughout the Middle East. A combination of targeted publicity, excellence and a number of distinguished cookery authors such as the renowned American cookery expert Paula Wolfert, have encouraged this popularity along with tourists who have been inspired to try their hand at cooking Moroccan dishes at home. It is part of Morocco’s success story as a diverse and fascinating tourism location.