Where are the Jewish Zaouias in Morocco?

There are many Jewish shrines and cemeteries throughout the country, which are visited every year by Jewish pilgrims. The majority of those located in the new cities or villages are preserved. All are protected by the Kingdom of Morocco.

Near Marrakech is the famous Jewish Zaouia of Telouet, once the seat of the Pacha Thami El Glaoui during the French protectorate. The remote village of Timezrite in the Atlas Mountains receives thousands of Jewish pilgrims during Sukkot, who come to honor the memory of Rabbi David U Moshe.

Some 20 minutes from Marrakech on the road to Ouzarzate is the tomb of Moulay Ighi visited by Muslims and Jews alike. Tucked away off a side road is the shrine complex of the rabbi known as the Jewish shrine of Moulay Ighi (Master of Ighi). It sits perched on a hilltop amidst the grandeur of the Atlas Mountains. For centuries, Jews (as well as Muslims) from all over Morocco would converge here on foot and on mules to visit the rabbi’s tomb and pray for his intervention in their lives. The remote shrine is considered one of the most popular in the country, and by some accounts thousands of people would arrive for the annual hiloula (pilgrimage) to the grave on the holiday of Lag b’Omer. Today the shrine is still visited by pilgrims (though in smaller numbers), who can now stay in new guesthouses and even enjoy a modern synagogue on the premises. Ourigane – Jewish – Berber Shrine of Rabbi Mordekhai and Rabbi Abraham Ben Hammou

In Ourigane, just outside the National Park, is an old Jewish Zaouia the shrine of Rabbi Mordekhai and Rabbi Abraham Ben Hammou. You will follow the old dirt road leads to a compound of buildings enclosed by a gate, overshadowed by mountains and built on rocky terrain in the village of Ouirgane. Inside the shrine are three different tombs, leaving the precise burial spot of Rabbi Haim Ben Diwan in doubt — befitting the mysterious circumstances of his death. Two of the graves are identified with markings that appear to indicate it is of Ben Diwan. The other two are believed to be for two of his disciples. Artifacts, some dating to at least the 1700s, adorn the room, including candlesticks, menorahs, Torah scroll crowns, the Ten Commandments (in Hebrew) etched on a plate, and a flower vase. Also in Ourigane is the Muslim sanctuary of Moulay Brahim near Asni (15 km). In the mountains north of Ouarzazate is the tomb of the saint David Oumouchy. South of Ouarzazate, Jews were once a major presence in the oases of the Draa Valley, especially in the town of Agdz. There are legends that the Jews controlled a kingdom in this valley before the arrival of the Arabs. East of Ouarzazate is the Dades Valley, where the Jewish Perez family from Andalucia made its home beginning in the 16th century. Tinerir, at the mouth of the Todhra Gorge, is believed to have one of the oldest Jewish cemeteries in Morocco. 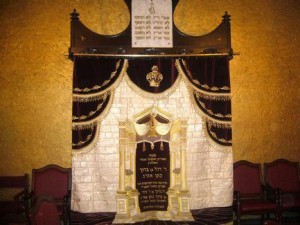 Taroudant is a walled city smaller than Marrakech. The Jewish community is believed to have been established in the region in the 11th century. It has a mellah and and large Jewish cemetery. The most important Taroudant saint is David Ben Baruk Cohen Azog. It once had a significant Jewish community of some 1,000 years. Jews made up more than 10% of the population and played an important role in the city’s economy.

The remote village of Timezrite in the Atlas Mountains receives thousands of Jewish pilgrims during Sukkot, who come to honor the memory of Rabbi David U Moshe.

Raphael HaCohen is a legendary rabbi who by tradition is buried in the village of Achbarou, south of Marrakech. There is a Muslim caretaker of the tomb complex and he is there to share stories of an old Jewish man who guarded the rabbi’s grave for decades, and reveals his own mysterious encounter at the site. The complex itself includes a synagogue, dining hall, guest rooms, well, and communal graveyard.

The Shrine of Haïm ben Diourne is the site of one of the Jewish festivals still held in Morocco. This complex contains the tombs of Rabbi Mordekai ben Hamon, Rabbi Abraham ben Hamon, and others. The shrine, known locally both as the “tigimi n Yehudeen” and “marabout Juif” (House of the Jews in Arabic and French, respectively), is a large white structure. The moussem generally happens in May in Taliouine, which is located in the valley of Casbahs between Taroudant and Ouarzazate and is the source of Moroccan saffron. Prior to the 1960’s, the Jews of Taliouine helped finance saffron production and trade. Fifteen kilometers west of Taliouine is the mellah of Ighil n Oghil. Within the mellah is an extraordinary synagogue, reconstructed by the Foundation for the Preservation of Moroccan Jewish Culture. Built entirely of mud clay and bricks, it is full of arches and has sculpted windows with diamond designs. Stone benches surround the main room and the alcove behind the bima. It is one of the best-preserved monuments to the Berber Jews, who were such an important population in southern Morocco until the middle of the 20th century.

The Tomb of Shmuel AbuHatzeira is located in Erfoud. He guards the tomb of Rabbi Shlomo Ben Lhans, who died while visiting Morocco from Israel.